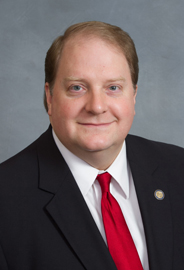 Work Experience: Before forming the firm of "Jonathan Jordan, Attorney-At-Law," Mr. Jordan advised and represented the Stokes County, North Carolina, Board of County Commissioners and most county departments as the County Attorney. He also represented the Stokes County Department of Social Services in court in Abuse/Neglect/Dependency Cases and in IV-D Child Support Cases. Prior to his appointment as Stokes County Attorney, Mr. Jordan served as the Communications Director for the North Carolina Republican Party from 2001 to 2003; ran his own public policy website from 2000 to 2001; and worked as Human Resources manager for a high-tech start-up firm in Raleigh, NC, from 1999 to 2000. From 1997 to 1999 he served as the first Director of Research for the John Locke Foundation, a state-based public policy think tank in Raleigh.

Political Experience: Mr. Jordan was the NC State Representative for House District 93 (Ashe and Watauga Counties) from 2011-2018. He is a member of the Executive Committee of the North Carolina Republican Party. In addition, he has served as the Vice Chairman of the Ashe County Republican Party, Legal Counsel for the Fifth Congressional District Republican Executive Committee, and a member of the Rules Committee for the North Carolina Republican State Convention in 2007, 2008, and 2009.

Education: Mr. Jordan received his JD and MPA degrees from the University of North Carolina at Chapel Hill; his MBA from Vanderbilt University's Owen Graduate School of Management; and his BA in economics and politics, with honors, from Wake Forest University. He is a member of the 5th graduating class of the North Carolina School of Science and Mathematics.

TAMMIE PRUITT-COFFEY is Legal Assistant to Mr. Jordan at the firm "Jonathan Jordan, Attorney-At-Law." She currently serves as the Executive Officer of the Ashe/Alleghany County Home Builders Association. She is also the Executive Director of the Ashe County Republican Party. She coordinates scheduling and real estate closings at the firm. In addition, Mrs. Coffey works on title searches and estate administration, as well as general administration for the firm. She has extensive past experience as General Manager across several states for a major retail chain.